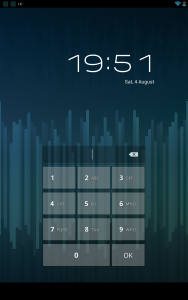 It has been 3 days since my Nexus 7 arrived. The good news is I’m enjoying it more than I ever thought I would. It’s been 3 days of learning and a lot of googling.

There are reasons for that; I’ve been primarily an iOS user for the last 4, at least, years; consisting of the iPhone 3GS, original iPad, iPhone 4S, not forgetting an iPod touch before all of that.

My only experience of Android before the Nexus 7 was a course in mobile development for a short period of my computing science degree. Aside from that, using friends Android phones for no more than 2 minutes at a time. I’ll be honest my opinion of android up to the last few months was not great, I’d often found Android to crash frequently and be far from user intuitive.

However the situation arose that:

-I knew I liked the larger size of the Galaxy Note.
-My iPad was feeling very slow compared to the iPhone 4S.
-People started talking about the Nexus 7.

-Finding out it was 7″s.
-It was only £169.
-I felt like something new, time for change, that adventure feeling.

And at the point I found out it had a quad core processor I purchased very quickly.

What I’m liking about the Nexus 7:

It is amazingly fast. There’s no feeling of having to wait. Applications are responsive and web pages render quickly. There’s a definite feeling of something powerful in this thing. I’ve yet to experience that feeling that resources are pushed. As far as I know it has 4 CPU cores and 12 GPU cores. And an additional CPU core unadvertised running at low clock speed to be used to allow the main cores to standby some of the time. (You can check Wikipedia but I think I’ve understood that right)

This size is perfect. There’s something quite special about the fact that it fits into your hand. The iPad at present feels too big in comparison.

The keyboard is very good, writing is fast, easy and accurate.
Battery life is good.
The display looks gorgeous.

Running internet speed tests on iOS devices only ever manage to pull down 15Mb/s, Nexus 7 is easily pulling down around 36Mb/s. I tested both on my 2.4Ghz network running N. (Note my Macs easily pull 60Mb/s +)
I dislike that it is unadvertised that the Nexus 7 does not have 5Ghz N, not that it matters.
The Nexus 7s ability to download data faster is most definitely going to give it a faster browsing experience than other devices.

The build quality has a solid feeling, the soft rubber back is comfortable to hold.

I dislike the box it came in, felt cheap and hard to open.
There is no decent Twitter client.
The Facebook app is causing me issues.
I can’t find an easy way to watch the 2012 London Olympics.
I dislike the USB connection, it sticks out too much.

I can’t sync anything via USB from my Mac the App doesn’t work. But this isn’t such a problem. This is really an internet/media consumption device. I have no concerns about the fixed storage. I have my own personal private cloud, this provides all my content. This does however require an internet connection. And I’m glad that the Nexus 7 doesn’t have a cellular data connection.

Because it has allowed costs to be kept low and anyone with a smart phone can tether. The majority of people wouldn’t want to pay 2 data contracts, paying for data twice doesn’t make sense.

I feel Android has come a long way, still some small things noticeable. For example I’ve noticed in some menus the Nexus 7 calls itself a phone. I think this may be down to how it’s running Jelly Bean though.

That aside from an overall perspective Jelly Bean runs well, and the Nexus 7 performs superbly. I think Android gives me a feeling of having slightly more control than iOS. This I like. I think the Nexus 7 is going to keep me happy for quite a while yet.