iOS 11.3 Update is out for HomePod – and it is a massive update: 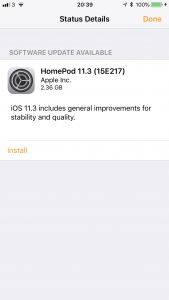 But what are we getting for 2.36GB – well we don’t know. “General improvements for stability and quality”.

The sound has changed, you’re thinking it too.

Here are some of my thoughts on it: