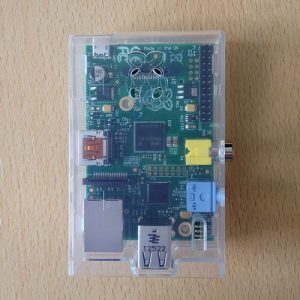 Above is the Raspberry Pi model B.

At present I’ve had the Pi for about 1 month.

Having contemplated numerous options of being able to run a small linux box in my home for quite some time. (I’d considered old PCs, old Mac Minis, and other things); A friend had dropped into conversation that he’d been using a Raspberry Pi. I ordered a Pi, and now I’ve gotten the after feeling of “why didn’t I think of this sooner”.

I wanted to run a Linux machine in my home as primarily I’ve only got Apple Macs at my immediate use. Although I use linux else where in my life both at work and home, I didn’t have any physical computers as such.

The reason I say, “as such” is because a number of devices will be and are running Linux in my home, but they are not computers defined by having the following; video output, usb, networking, memory, cpu, serial, sound, storage – all available and together – the things that make up a versatile device. And that is what makes the Raspberry Pi special.

I have so far done a number of things with the Raspberry Pi; it’s running the Pi operating system, Raspian. I’ve got it on my network, no display attached, accessed via ssh. The first thing I did was set it up as a small web server. I also installed the network monitoring tool Cacti. And from here I have set up a series of graphs telling me about devices on my network, for example live internet statistics. I then did a small amount of development to integrate this with Status Board from Panic. (If you’re not familiar with Statusboard – check it out, I love it. I will share more information on this in soon.

Anyone wanting to know where to buy a Raspberry Pi? I ordered mine here: Premier Farnell/Element 14.

Where did you get the case with the Pi logo on? I ordered it with that case from the above supplier.